On Tour at the Edinburgh Fringe 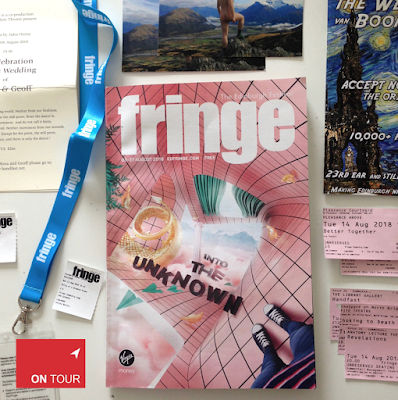 During August the ON Tour team; Jo and Sorcha, and Rural Arts Director; Angela Hall, all went to Edinburgh Fringe to watch a variety of shows in hope to add them to a future programme for ON Tour. Take a look below to see the team's top Fringe moments and highlights.

I went to see three shows by Paines Plough at the Roundabout @ Summerhall. These included "Sticks and Stones" and "Island Town". I particularly enjoyed Sticks and Stones; a play all about language and how we use it. Both the plays had the same three actors in them as well. The acting was brilliant; you could hardly recognise it was the same people in both shows it was that good!


My personal highlight of the Fringe was the show "Dressed" as it was an emotional true life story told by those that had experienced the events they spoke of, that used drama, dance and music from three talented performers.

I got the chance to see a variety of shows at the Fringe. I saw comedy, music, spoken word and theatre.

On the first day I got the chance to see a very quirky one man show called "Van Gogh Find Yourself" (#VGFY) which incorporated drawing and painting into the show whilst listening to "Van Gogh" tell the story of his life.

One of my favourite moments of the Fringe was watching the family audience react to Aca Theatre's family show "Better Together". A show that was impossible not to laugh along with!

My favourite show at the Fringe was Revelations by James Rowland. James told an honest tale about his experience of being a sperm donor for his two best friends and the both hilarious and harrowing implications that came along with this decision, all whilst interlacing stories of his Christian upbringing.

Our highlight of @edfringe had to be #revelations by @Jdsrowland. A truly mesmerising performance. Go and see it if you have the chance!
— Rural Arts (@RuralArts) August 16, 2018

James Rowland has previously toured with Rural Arts ON Tour for Autumn 2017 with his show "Team Viking". He will return again this Autumn 2018 with another show "100 Different Words for Love" which will be touring to Skipton Town Hall on Friday 21st September and Terrington Village Hall on Saturday 22nd September.

I went to Fringe and saw a variety of theatre and family shows. It's hard to pick a favourite show as they were all so good, but I especially enjoyed watching Starcatchers and Curious Seed's children's show MamaBabaMe, a show that incorporated dance, physical theatre and live music to create a lovely sensory performance for early years.

MamaBabaMe at the 2018 Edinburgh Festival Fringe - Trailer from Starcatchers on Vimeo.

Like Angela, I also got to see a Paines Plough production of Blackthorn which will be touring as part of ON Tour from September 13th to 15th 2018. I would definitely recommend anyone to go and see the play if they get the chance, especially as it is set in North Yorkshire and based on the writer Charlie Miles' own experience of growing up in Kilburn.


Overall we all had a great time watching all the shows at Edinburgh and are looking forward to choosing which ones we'll be booking for ON Tour Autumn 2019! In the meantime, don't forget to check out the latest shows we have coming up for both Autumn '18 and Spring '19 on our Rural Arts performances page, with shows all across North Yorkshire and the Tees Valley.

Would you like to bring proffeisonal shows to your local community venue? Find out more here